The line-up will be considered a small-ball lineup to accommodate the incredible players the team has had at the wings. The list will take into consideration their time with the team, their accolades, and what they mean to the team and the city as a whole. It will not just be the best all-time player to put on a Raptors jersey, but what those players did when they had that jersey on.

The point guard and the heart and soul of the organization is Kyle Lowry. Before Lowry was traded to Toronto, he was viewed as a role player. His first season with the team was about getting him to be happy with the situation he was in.

Lowry was reportedly ready to leave the organization after being very upset with being traded there. A switch seemed to flip in the 2014-2015 season, which was his first All-Star year. Ever since, he has been the Raptors’ own ‘bulldog’.

Over the seven seasons with the organization, he has averaged 17.4 points per game, 7.1 assists and 4.9 rebounds, while making five all-star teams and an All-NBA team honor in 2016. However, when it comes to Lowry, his on-court stats and accolades do not completely show how he can change the game. He makes his teammates better while being a vocal leader, and was a key part of the Raptors’ championship squad.

Next up is one of the most beloved former Raptor players of all time, DeMar DeRozan. Although DeRozan was traded for Kawhi Leonard in a blockbuster move during the 2018 offseason, no one will ever forget what he did for the organization.

The Raptors drafted the shooting guard out of the Universty of Southern California with the ninth pick in the 2009 draft. The team was getting ready for a new chapter and DeRozan was the perfect man to add to the roster.

In his nine seasons with the organization, he averaged 19.7 points, 3.1 assists, and 4.1 rebounds per game. He also made four All-Star teams, the All-NBA third team in the 2016-2017 NBA season and the All-NBA second team in the 2017-2018 season. His loyalty towards the team and the city was what bought his way into the fans hearts. Although it was sad to see him go, what he did for the city will never be forgotten.

Next is the man that put the city on the map – Vince Carter. Although he was not officially drafted by the Raptors, he was traded to them on draft day.

Carter was the first taste of a real star that the organization ever had. Winning NBA Rookie of the Year in his rookie season, the people of the city knew he was something special. In his seven seasons with the team, he averaged 23.4 points per game, 3.9 assists and 5.2 boards.

Although the end of his tenure with the Raptors put a little bit of a dent in his reputation, his on-court ability is something unforgettable. Carter made six all-star teams as a Raptor and won one of the most famous dunk contests to ever take place in the year 2000 (watch below). He also made two All-NBA teams while with the Raptors,  third-team in 1999-’00 and second-team in the 2000-’01 season.

At the power forward is Kawhi Leonard. The athlete that brought the Toronto fans and organization the one thing they were missing, a championship. He is the most talented player on the Toronto Raptors’ all-time starting lineup and his stats show it.

He put up great numbers in his one season with the team, averaging 26.6 points, 3.3 assists and 7.3 rebounds per game. The postseason he had with the team was one of the best playoff runs by a player ever, averaging an incredible 30.5 points per game, 3.9 assists and 9.1 rebounds.

Although he only played one season with the team, he earned his place on this list. The Raptors made a trade not knowing the status of Kawhi’s health, but knew it was a bet worth making. In the end, that trade was one of the best decisions that Masai Uijiri will have ever made.

At the center position and to top of the Toronto Raptors All-Time starting five is Chris Bosh. Drafted by the Raptors with the fourth pick in the 2003 NBA draft. He was the team’s saving grace after Vince Carter and Tracy McGrady had left.

Playing with the team for a total of seven seasons, Bosh averaged 20.2 points, 2.2 assists and 9.4 rebounds. Although he had not developed his three point shot, his back to the basket post-up game was phenomenal.

He was never able to find success with the city, but he personally thrived and became a great player. He later went on to Miami where he drastically changed his game to become a two-time champion.

Bosh was an 11x All-Star, five of those coming while he was with the Raptors. He also made second team All-NBA in the 2006-2007 season. 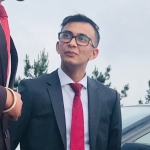