The NBA season is over three-quarters of the way done. The playoff picture is starting to take shape which means one thing; the beginning of potential playoff matchups taking over the NBA media landscape.

The Denver Nuggets have been discussed on a number of airwaves in terms of potential playoff match-ups. After their star guard, Jamal Murray suffered a season-ending ACL last week, the Nuggets playoff hopes have been diminished in the eyes of the casual NBA fan.

Nonetheless, the Denver Nuggets and their fanbase still believe this team has the capabilities to make a run. Yet, many believe their first-round match-up dictates how far they will go into the playoffs. Thus, there are a few teams that the Nuggets want to face come the middle of May. If Denver can fall into a few of these potential playoff match-ups, their chances of advancing should become more favorable.

Who Does Denver Want to Face in the First Round of the Western Conference Playoffs?

There are roughly nine potential match-ups for the Denver Nuggets in round one of the Western Conference Playoffs. However, the chances of the Nuggets facing a team that’s jockeying for the eighth and final playoff spot is not very likely. That includes the Memphis Grizzlies, the Golden State Warriors, or the San Antonio Spurs. The chances of facing one of them are not impossible, but with Denver smack in the middle of the playoff seeding, this breakdown will not include them.

That leaves Denver with six potential playoff match-ups for the first round. The Utah Jazz and the Phoenix Suns occupy the top two spots in the conference, only separated by one game. Just behind them are the Los Angeles Clippers, who find themselves only one spot out of the second seed. Right behind Denver, are the Los Angeles Lakers who are firmly in the five seed, followed by the Portland Trail Blazers and the Dallas Mavericks.

The Dallas Mavericks came into this season with high aspirations. The team is lead by pre-season MVP selection Luka Dončić. They finally have a healthy Kristaps Porzingis to run alongside Dončić. Plus, the duo is surrounded by a bevy of sharpshooters ready for kick-out threes. And yet, the Mavericks struggled out the gate and find themselves still in a play-in game situation.

The Mavericks present the best potential playoff match-up for the Denver Nuggets if they were to meet in round one.

First of all,  the Mavericks offense has become the Dončić show. While Dončić has solidified himself as one of the best playmakers in the game, he cannot always bail the offense out. The Denver Nuggets found themselves another defensive juggernaut in Aaron Gordon. While nobody believes Gordon can shut down Dončić entirely, Gordon has the ability to make Dončić rely on the other Mavericks to look for their offense. If the Nuggets can force anyone other than Dončić to try and takeover, the Nuggets hold that advantage.

On the other end of the court, the Nuggets already hold the advantage with their prized MVP candidate Nikola Jokić. Nobody on the Mavericks’ backline can contain Jokić, not even the giant, Boban Marjanović. That means the Nugget’s center will have his way with the Mavericks all series long and the Nuggets’ offense should remain potent.

It is no surprise to anyone that the Phoenix Suns are playing incredible basketball this year. Despite a rough patch early in the year, the Suns have been hovering around the top of the conference for the entire season. Lead by their new acquisition of Chris Paul and the rise of Devin Booker, the Suns have proven their success is not a fluke.

While the standings may point to a potential playoff match-up between Phoenix and Denver as a disadvantage to Denver, let’s take a step back. Does everyone remember what happened to the Denver Nuggets back in the 2019 playoff match-up against the San Antonio Spurs? The Nuggets finally took the leap to become a true contending team as they grabbed ahold of the Western Conference’s second seed. They matched up against a revamped Spurs squad that never lived up to their true potential. It was supposed to be a cakewalk for Denver, but San Antonio pushed Denver to the brink of elimination a number of times. This proved one thing, while Denver was easily the better team, they were still young and inexperienced.

Now let’s jump back to this potential match-up. Phoenix finds themselves in a similar position. The team (outside of Chris Paul and some others) are relatively young and inexperienced. Devin Booker, Deandre Ayton, Mikal Bridges, amongst others have not played a single minute in an NBA postseason. The NBA playoffs are a different animal, as the Nuggets found out in 2019. Even with Jamal Murray sidelined, the Nuggets have the playoff experience that could push the Suns into an uncomfortable spot and potentially lead to an upset.

The Portland Trail Blazers should be the third-best potential playoff match-up for the Nuggets. They are ranked below Dallas and Phoenix solely because of one person, and that’s Damian Lillard. Surely many people will argue that defending Lillard should be the same as defending Dončić. However, Damian Lillard is a different breed when it comes to the playoffs, and the Blazers create more headaches than the Mavericks.

The Nuggets have played this game with the Blazers many times. They try and force the ball out of Lillard’s hands and make someone else beat them. Well, back in 2019, the Blazers did just that with CJ McCollum. McCollum was the main reason why the Nuggets lost game seven of the NBA Western Conference Semifinals. And yet, this strategy needs to be the same for the Nuggets this time around. If the Blazers get hot, they get hot, but if the Nuggets can avoid “Dame Time”, they need to and not second guess it.

Outside of Lillard, the Blazers have a handful of offensive weapons that can blitz their opponents at any time. However, for how good the Blazers are on offense, they are equally as bad on defense. If the Nuggets can withstand a blitzkrieg of Blazer buckets, the Nuggets can easily outscore them, especially with Nikola Jokić leading the charge. 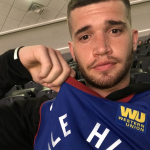