The NBA is in full force right now and with that, Nike has come out with this season’s City Edition jerseys. These are basically the alternate jerseys for the NBA teams and they are different (at least most are) every year ever since Nike took over the branding. With that in mind, there have been some polarizing opinions on which ones look good and which ones leave something to be desired. So, we will be ranking our top five City Edition jerseys today and discussing which ones look the best. Before we go any further, bear in mind this is subjective and just an opinion piece. Without further adieu, let’s get started.

Here are the Wizards new City Edition jerseys. They will wear them for the first time on 12/5 vs. Philly.

They are similar to the Stars and Stripes jerseys fans loved in 2016-17 that were discontinued. pic.twitter.com/dz1W0MD85v

The Wizards may be getting some mixed reviews on their jersey, but it fits. They are sticking to the red, white, and blue theme and simply have the letters, “DC,” on the front. They don’t differentiate too much from past schemes. However, the case of “sometimes less is more,” seems to apply in this case. The Wizards do not have much to cheer for this season, but hey, at least they got some cool new merchandise coming soon.

The 76ers have hit it out of the park the last couple of seasons with their alternate jerseys. This season is no different. They are coming out with what looks to be a cream color and the cursive writing spell out Philadelphia. One can certainly tell that they take some inspiration from their historic landmarks. The 76ers have a lot to be excited about this season and their city jerseys are just another thing for fans to look forward to.

The @LAClippers unveil their new City Edition uniforms on the cover of SI 👀 https://t.co/7pyGtSQNai pic.twitter.com/hf7Rh14TYd

For those of you who have played Grand Theft Auto: San Andreas, the font should certainly be bringing up reminders. The font is “Old English,” to be exact. The color scheme may not be too flashy, but the white and black works perfectly with the word design. They are calling it, the “reinvention,” which is fitting considering the makeover the Clippers underwent in the offseason getting both Kawhi Leonard and Paul George.

The Grizzlies are going throwback for their city jerseys this season. They are going back to the good ‘ole days of the Vancouver Grizzlies with the cool turquoise. The jerseys which were worn back in the days of Mike Bibby to be exact. I have yet to see someone complain about these jerseys and for good reason. They just simply work. The Grizzlies have a promising future with the rookie, Ja Morant, leading the way, but it is nice to see the team paying homage to their roots.

Take a closer look at our 🔥 new uniform!

The Nuggets win this year’s City Edition Jersey contest by a healthy margin. They stick with the rainbow skyline theme but incorporate it on a black jersey instead of a white one this time around. Even fans of other teams admit that this design is extremely sleek. For all of the designs we’ve gotten so far which are pretty bad, we at least have the Nuggets’ incredible city edition jerseys to help make up for it. All in all, it is pretty clear that the Nuggets have the best looking city edition jerseys and there really is not much debate. 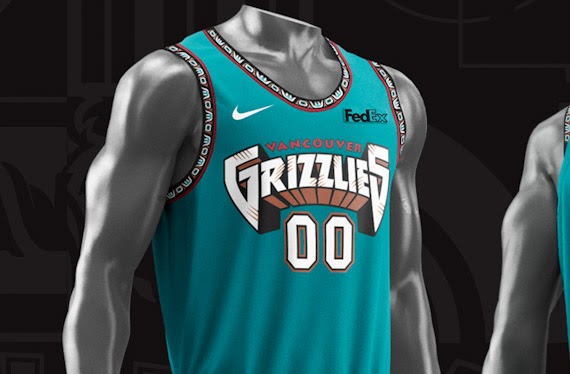