Apparel has always been an important part of the culture surrounding basketball. Michael Jordan was one of the first players to partner with a company to create custom shoes that he wore during games and that people could purchase as well. Since then, many companies went after top-tier players to create custom “Player-Way” shoes. One of the companies that are putting out some of the top basketball shoes with top players is adidas.

*FTC Disclaimer: This post contains affiliate links. HoopLifeTV will be compensated if you make a purchase after clicking on the links. 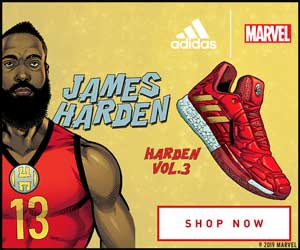 James Harden, the 2018 NBA MVP, is an absolute animal on the court. A 7-time All-Star, there is no argument that Harden is one of the best players in the NBA. This past season, Harden averaged 36.1 points, 7.5 assists, 6.6 rebounds, and 2 steals per game. One thing that is most known about Harden is his ability to score the ball, as he does it with ease. In 2015, Harden signed a 13-year deal with adidas that would pay him a sum of $200 million.

The Harden Volume 3’s are his newest style of the shoe released by adidas. With different styles and numerous different color and pattern options, these shoes are a must-have for ever basketball sneakerhead. 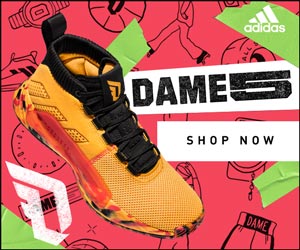 With the new Dame 5’s, it’s always Dame time. Damian Lillard has made a name for himself due to his offensive ability on the court and his unbeatable loyalty to staying with the Portland Trailblazers. His insane buzzer-beater shot against the Thunder in the playoffs only hyped him up even more.

Lillard is also known for his quick cuts and movements with the ball. Thanks to the new Dame 5’s, it will be even easier for him to make those movements due to the great traction and control the new shoes can offer. Just like the Harden Volume 3’s, the Dame 5’s also come in a variety of different colors that will fit everyone’s sense of style.

The NBA is currently loaded with young talent, but none other than Donovan Mitchell is capable of making this list. His first custom shoe is an absolute hit. Mitchell is about to enter his third season in the NBA and is already known to be a massive threat on the court. In his first two seasons, Mitchell averaged 22.1 points, 3.9 rebounds, and 3.9 assists per game. One aspect of Mitchell’s game that he is most well known for is his athleticism and dunking ability.

Some of the colorways of Mitchell’s new shoes partnered with Marvel to create Spiderman and Iron Man themed shoes, which just look amazing. If you are looking for some new shoes to dominate the game in, definitely check out Spida’s new shoes!

If you feel like you need an extra boost on the court, adidas also offers numerous other products to help improve your game. Check them out here!